Sign in
Stores
Basket £0.00 0
inc vat ex vat
The UK's No.1 Independent Bed Retailer
01642 613684 Login / Sign up Search Basket 0
Menu
MenuX
Contact Us Login / Sign up
Next day delivery Mattresses & Beds Available Free UK delivery AVAILABLE* Custom Size Mattress & Bed Specialists
Our web site uses cookies so you can place orders and we can provide a better service. Continue to use the site as normal if you're happy with this, or find how to manage cookies. OK, got it
Home Page Sleep Advice Centre What Is A Sleep Cycle?
Umarah Hussain author/umarah-hussain

What Is A Sleep Cycle? 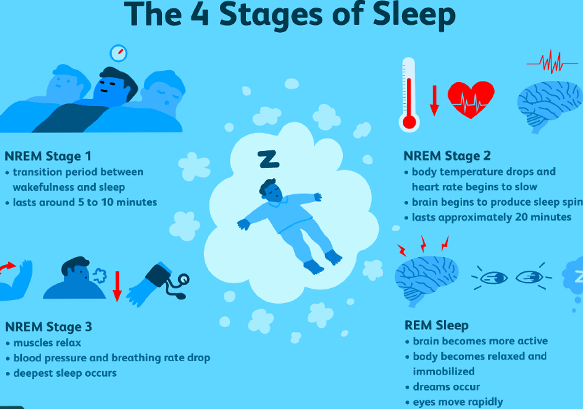 How Does A Sleep Cycle Work?

We all need sleep, some of us love a little extra shut eye, whilst others need to catch a few zzz’s to fuel their body to get on with the physical exhaustion of the next day. But sleeping isn’t as straightforward as sleeping and waking up the next morning. Our bodies go through multiple cycles each night that fluctuate in levels of brain activity. Intrigued? Keep reading.

Time asleep is not universal. However, over the course of the night, your total quantity of sleep is rounded up into a sleep cycle, which is composed of four stages. Not all of these stages are the same length, but last around 90 minutes on average.

As mentioned, there are four sleep stages, three that form non-REM, also known as non rapid eye movement (NREM) sleep and one for rapid eye movement (REM). These stages of sleep are determined on brain activity and are commonly referred to as sleep architecture.

The NREM stage consists of 3 stages, and it is suggested that the higher the stage of NREM sleep, the more difficult it is to awaken a sleeper from their slumber.

The first stage is generally known as the dozing off stage, which is seen to last between 1 to 5 minutes. During this time, the body hasn’t begun to relax, however brain activity begins to slow down with small movements of the body. At this stage, it’s fairly easy to wake a sleeper up, however if they aren’t disturbed, they will swiftly fall into stage 2 of the sleep cycle.

Whilst in stage 2, the body begins to fall into a more relaxed state, which consists of a drop in temperature and muscles begin to relax. The heart rate steadies and brain waves begin to show a new pattern whilst eye movement slows. There are short bursts of activity, however these actually help being woken up by external forces.

This stage can last around 10 to 25 minutes, and can actually become longer throughout the duration of the night. Generally, a sleeper can spend about half of their sleep in the stage 2 of the sleep cycle.

Known as deep sleep, stage 3 is the hardest to wake a sleeper up from resting. The muscle tone, breathing rate and pulse decline as the body is fully relaxed. Brain activity shows ‘delta waves’ and experts suggest this stage is vital for restorative sleep, which helps the body with recovery and growth.

This stage is known to bolster the immune system, and contributes to the likes of creativity and greater attention span whilst awake. We spend most of our time asleep in stage 3 as deep sleep, these stages however, do get shorter and more time gets spent on REM sleeping instead.

Whilst in REM sleep, our brain activity begins to pick up, the temporary paralysis of our muscles begins to ease as we begin to near levels that are seen when we’re awake. Even though our eyes are closed, they can be seen as moving quickly, which is how this stage has been given this name.

Studies suggest that REM sleep is vital for cognitive functioning, creativity, a healthy memory and greater learning scope. It is also known for emanating the most vivid dreams that can be remembered when we’ve awoken. Although dreams can occur in any stage, it’s the REM sleep that has been found to be intense and more common than NREM stages.

Sleepers don’t actually enter a REM sleeping stage until they have been in slumber for over 90 minutes. As sleep begins to get longer, the REM sleep will get closer and closer, however if sleep isn’t elongated, it can sometimes last only a few minutes.

Why Does Sleep Matter?

Such sleep stages are crucial as they allow our brain and body to recuperate and upsurge in proper development. An insufficient amount of both deep sleeping and REM sleep can be found in studies to show problems in emotions, physical and mental health and cognitive functioning.

Light sleepers, such as those with sleep apnea, may struggle to sleep sufficiently, therefore fail to properly cycle into deeper sleep stages. Whilst those with insomnia probably won’t get enough sleep to accumulate the required amount of time that is needed for each stage of the cycle. This can severely affect logical reasoning, thus the best way for such people to make up for lost sleep is speaking to a doctor or sleep expert for more advice.

Sleeping is a key step in our daily lives that keeps us healthy and focused on the day ahead. Our sleep hygiene is essential, so keeping a clean and fresh sleep environment and good sleep-related habits (not eating before bed, limiting screen time and avoiding alcohol before bed) will undoubtedly help to improve upon your sleep cycle.